Recently I attended a tasting of wines from the catalogue of the Hospices de Beaune as Christies Auction House prepares for the coming event in November this year.

The Hospices de Beaune refers to an annual wine auction that occurs each year, typically on the third Sunday of November. Founded in the fifteenth century by the Chancellor of Duke Philip the Good, Nicolas Rolin, and his wife Guigone de Salins, the activities of the Hospices de Beaune centred around the Hôtel-Dieu. The hospital, visually noted for its distinctive polychrome roof tiles, was built in 1443 to provide care for the residents of the area suffering the ravages of the Hundred Years’ War and a recent outbreak of the plague.

1859 marked the first annual wine auction to raise funds in support of the hospice with 189 barrels of wine being offered for sale. Today the hospice has vineyard holdings of 61,000ha and offers 47 different cuvées for sale from 228 barrels. Of the wines available 85% are sourced from Premier and Grand Cru sites.

Currently, funds raised at the auction for the Hospices de Beaune are dedicated to three main areas; maintenance of the vineyard and heritage conservation while the majority of the funds raised go to the hospital.

The auction takes place during a time of great festivity in the town of Beaune. The three day festival Trois Glorieuses, or three glorious feasts, begins with a black tie chapter meeting of La Confrérie des Chevaliers du Tastevin at Château du Clos de Vougeot and ends with the Paulée de Meursault, a lunch celebrating the end of harvest, at Château Meursault. Between these two events lies the auction, which is open to participants from around the world and although the prices are higher than current commercial value (all in the name of a good cause!) they are seen to have some impact on the market prices for the new vintage, making this a very important event in the international wine calendar.

The wine offered at auction is from the actual year of production and following purchase the wine is cared for by a negociant over the next 12 – 24 months until bottling. The successful bidder may opt to have the wine bottled using personalised label but all bottles must carry the distinctive crest of the Hospices.

The 47 different blends or cuvées are named in recognition of original benefactors, the details of whom may be found below for the 10 wines tasted.

The Cast of Cuvées and Tasting Notes

Upon the death of Françoise Poisard the vineyards from his domain included land and two houses which came into the Domaine des Hospices.

The wine is derived from three plots totaling 141ha. in Chaintré which is located in the south of this appellation.

Aromas of orange blossom, jasmine and ripe stone fruit followed by some citrus on the palate. Although the same alcohol as the other two white wines, the warmth from the alcohol was persistent and the most present in all three white wines. 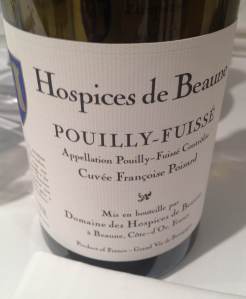 An inspector of telegraph lines who upon his death donated his entire fortune to the Hospices de Beaune in 1884. This generosity provided the construction of a surgical block and a wing of the hospital dedicated to the care of elderly residents.

Two plots of land from the Mersault-Charmes appellation totaling 88ha. are used to produce this wine.

Floral aromas, citrus reminiscent of lemon curd and tangerine alongside a lovely mineral finish that persisted all the way through to a zingy lemon juice note at the very end. My favourite white of the night and one that revealed its layers as it opened in the glass. 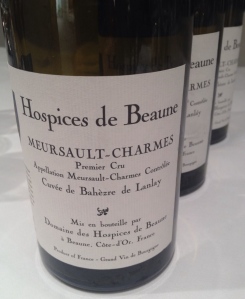 A descendent of Guigone de Salins, Françoise was a priest and canon at the church of Nortre Dame de Beaune. He bequeathed his vines to the Hospice in 1745.

One of three Grand Cru wines in the Hospices de Beaune portfolio, this wine is created entirely from a 48ha plot in Le Charlemagne.

Lots of lovely white flowers, citrus and mineral notes but at first tasting it was rather reticent and faded against the more forward Mersault-Charmes. Returning to this wine at the conclusion of the tasting revealed a complex personality that invited sip after sip as its personality unfolded – perhaps this was my white wine of the night too? 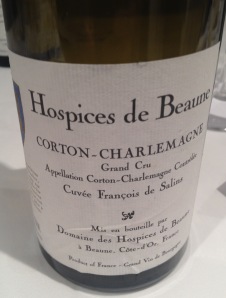 Arthur Girard donated a portion of his estate to the hospice in 1936 and this wine is produced from a 1ha. plot that runs up to the commune border with Beaune.

An easy drinking red wine with notes of sweet red fruit and spice alongside some herbaceous green leaf notes.

At age 18yrs Guigone de Salins became the third wife of the then 47yrs. Nicolas Rolin the wealthy Chancellor of Duke Philip the Good. Together they had three children and worked on a number of charitable projects together including the establishment of the Hospices de Beaune.

In 1462 Guigone de Salins was widowed but continued to lead the Hôtel-Dieu until her death in 1470.

The wine is produced from two plots totaling 264 ha. and is more brooding in nature providing a good contrast to the previous wine. The fruit notes are darker with more earthy notes coming through and on the palate the weight is fuller with softer acidty and slightly powdery tannins. The fruit along with candied violet and pencil shaving notes made this wine a pleasure to drink.

A generous benefactor, Françoise Blondeau not only provided the bells of the Hospice de la Charité, which are still used today, he also donated all his vineyards in Pommard and Volnay upon his death in 1811.

One of four Premier Cru wines from Volnay offered by the Hospices de Beaune, this wine had a bright red fruit character making me think of raspberries and sour cherries which sat alongside notes of black tea leaves. 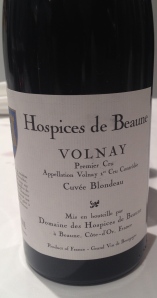 This cuvée is named to honour the Sisters of Charity who devoted their lives to the care of those less fortunate and upon their deaths left their belongings to the hospice.

As of 2005 the wine became 100% Premier Cru and the 2011 showed good complexity and power on the nose with aromas of forest fruit, spice, violets and dark minerals all of which followed through on the palate. 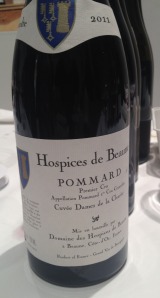 With no heirs to bequeath her estate to, the wife of the King’s Keeper of the Mint in Dijon, Charlotte Dumay donated vines in Aloxe to the hospice.

Sourced from two plots totaling 266ha. this wine had an appealing elegance to the structure. Sitting alongside red and black fruits were delightful floral notes of violets and a touch of rose petals. 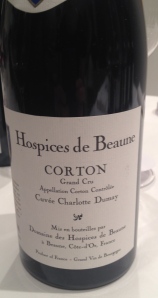 A relatively newcomer to the Hospices de Beaune, this Grand Cru plot was donated in memory of his mother, by Jean Collignon in 1976.

Produced from one plot of land totaling 174ha, which lies immediately next to Chambertin Clos de Bèze, this was my red wine of the night – elegant and well structured with the perfect balance of spice, forest floor and fruit along with the subtlest hint of sweet oak sitting just behind these flavours. 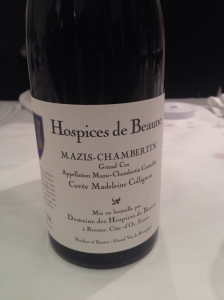 This wine joined the catalogue of the hospice in 2012 and is the newest wine to be included in the auction.

The wine is sourced form a 17ha plot and showed floral, mineral and some barnyard notes with the fruit very much playing a secondary note. 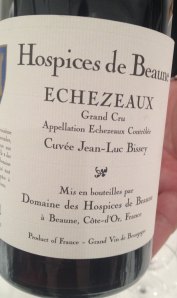 All in all a stunning cast of characters and just a wee bit tempting don’t you think?